Get To Know Us

Doug and Lynne Seus, a husband and wife team, followed their dream and adopted their first grizzly bear cub in 1977, and named him Bart the Bear. Through their industry work with Bart the Bear and their humane training methods, the Seuses spawned a legion of followers. With Bart as ambassador, the Seuses launched Vital Ground in 1990 through the purchase of 240 acres of prime grizzly bear habitat adjoining protected land in The Nature Conservancy’s Pine Butte Swamp Preserve along the eastern front of the Rocky Mountains in Montana. Doug and Lynne are now the human parents to Bart the Bear 2, his sister Honey Bump and the eldest of the three, Tank.

For Doug, the joy of working with bears is about building a relationship with them. Today, the Seuses operate Wasatch Rocky Mountain Wildlife Ranch and focus exclusively on grizzly bears. At present, a substantial amount of their time, resources and the talent of their animals are dedicated to promoting the work of Vital Ground.

The Art of Animal Training

Established in 1973, Doug and Lynne Seus followed their hearts’ dream of devoting their lives to 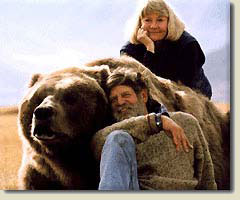 the training and care of animals. Starting with wolves, dogs, cats and horses, they soon expanded their expertise to include cougars, coyotes, deer, bobcats, foxes, raccoons, skunks, hawks and eagles. But the real magic happened when Bart the Bear came into their lives. Since reaching a new height in animal performance with Bart’s starring role in the 1989 movie, The Bear, Wasatch Rocky Mountain Wildlife has specialized in Kodiak and grizzly bears.

Animal training is an art that requires immense patience, compassion, and understanding. The Seuses, their daughter Sausha, son Jed, and long-time trainer Smitty, pride themselves on supplying the film industry with the most highly trained bears available. Bears capable of not only behaviors and commands, but characterization.

Wasatch Rocky Mountain Wildlife has provided animal stars for over 25 major motion pictures, hundreds of TV shows, commercials and documentaries, including Dr. DoLittle 2, THE EDGE, Legends of the Fall, We Bought a Zoo, Game of Thrones, and Growing Up Grizzly 1 and 2  for Animal Planet.

Working closely with other animal companies, we will find and supply the most qualified animals and trainers for all types of productions.