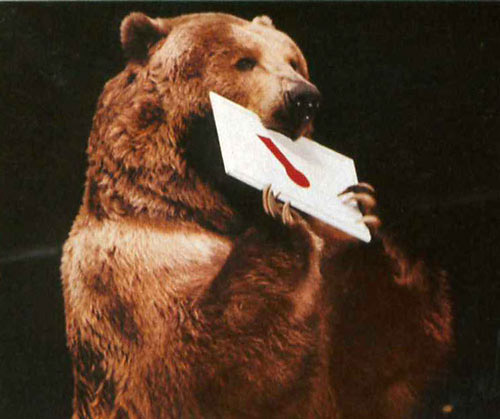 “He stands more than nine feet tall, weighs about 1,400 pounds and eats 40 chickens daily. But Bart the Bear isn’t just big – he’s a monster talent. Appearing opposite Anthony Hopkins and Alec Baldwin in The Edge (1997) Bart ‘pilfers the picture,’ according to the Los Angeles Times. Now 21, the Kodiak grizzly (above, presenting Titanic’s sound effects editing Oscar) was just a cub when trainers Doug and Lynne Seus bought him from a zoo for $50. He has since made 50-odd movies, TV shows and commercials and is one of the best-paid animals in showbiz. (Part of his $10,000-a-day fee supports the Seuses wild-bear conservation work.) Still, this star cares little for cash. He’s in it for the peanut-butter sandwiches.”