Characterization: Leading Man
Our “Jimmy Stewart” Bear. Tank’s personality was personified in his starring role of Archie in Dr. Dolittle 2. His special ability to work up close and personal with people was evidenced when he appeared on the Tonight Show  with Jay Leno and sat on the red sofa for his interview. His calm, gentle nature makes him the perfect bear for studio work and commercials. 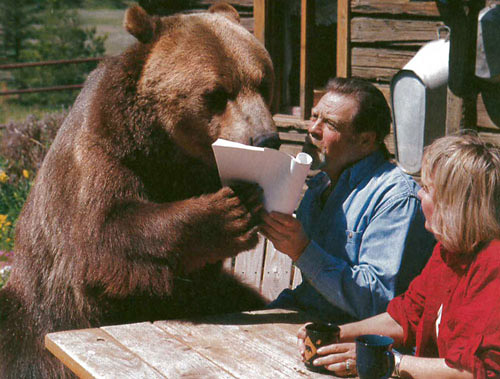 “Tank, the 800-Ib., 7-ft. tall grizzly who stars with Eddie Murphy in Dr. DoLittle 2, knows how to throw his weight around. The 6-year-old rookie actor demanded more than just a studio parking space: He nabbed an entire lot, freshly sodded and complete with wading pool. During the film’s five-month shoot, Tank snacked on roast beef, pasta with pesto sauce and strawberry smoothies, not to mention Ben & Jerry’s ice cream – Cherry Garcia, natch. ‘Not too much,’ says his co-trainer Lynne Seus, 55. “But Tank was happy to have a pint a day.”Tank clawed his way to the top, besting more than 50 competitors to play Dolittle 2’s performing bear Archie, who scrubs himself in a bathtub, eats popcorn while watching TV and toasts marshmallows around a campfire with Murphy. ‘He has a playful personality and a great sense of humor,’ says Doug Seus, 58, who has trained animals for movies and commercials for 209 years. ‘He handled everything like a pro.’
The Seuses are hoping Tank will follow in the paw prints of Bart, their 1,800-Ib. grizzly bear who died of cancer last year at age 24 after wowing critics in eight films, including The Bear and Legends of the Fall. They’ve been grooming Tank since adopting him from a Wisconsin breeder as a 6-week-old cub. ‘We fed him, we loved him, we played with him,’ says Doug, ‘just like you would a child.’
No fan of the Hollywood scene, Tank is happiest at home in Heber City, Utah, where he romps in a nearby creek and downs 30 lbs of apples, carrots, roast chicken and salmon a day. ‘As long as Tank can wrestle with me and eat,’ says Doug, ‘he’s pretty much happy.’ ”
– People magazine, July 16, 2001 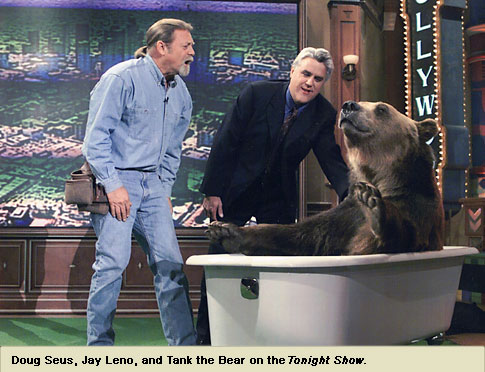 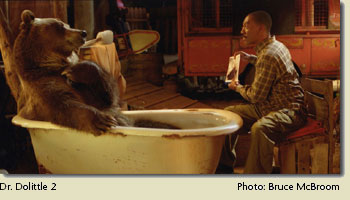 “There s a new Ursa Major on the Hollywood scene and his name is Tank.”

“The Trainer, Doug Seus, was amazing. The animatronic bear turned out to be quite a waste of money, because Tank the Bear was so well trained.” 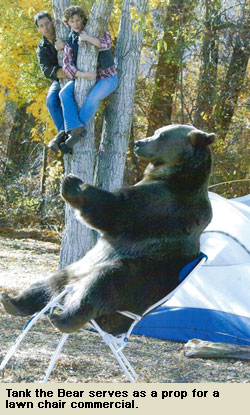 Steve Carr praises the acting ability of the Grizzly thespian named Tank. ”He has actually got a lot of range. He is a bear who is committed to his art as an actor.” In Dr. Dolittle 2, this bear star does a lot!”

“…But one animal in Dr. Dolittle 2 stood out: Tank, a 7-foot-tall, 800-pound bear, who beat out over 50 competitors for the coveted role of Archie. ”Tank is really special,” says Davis of Hollywood’s newest four-legged find, ”It was sometimes difficult to realize that he was a bear, and not a human.” 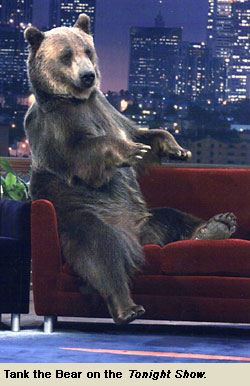