1977 was an incredible year for Doug and Lynne Seus. It seems like just yesterday their arms held two 6-pound bundles. One of those bundles grew to be a giant 1,580 pound Kodiak Bear, the other 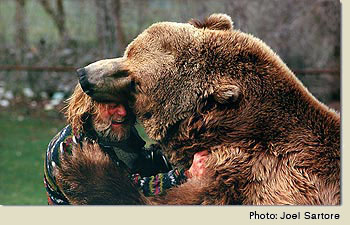 was a little strawberry-blond daughter.

For over four decades, bears have been the focus for the Seus family. Doug’s unique ability to understand and communicate with these giant creatures has set him apart in the world of animal training. Under Doug’s care and coaching, Bart the Bear 2, Tank the Bear, and Honey-Bump Bear have become versatile actors.

From the comedic antics of Dr. Dolittle 2, The Great Outdoors and Without A Paddle, to the spellbinding drama and adventure in such films as The Bear, Legends of the Fall, The Edge and An Unfinished Life, Bart the Bear 2, Tank the Bear and Honey-Bump Bear consistently deliver what the script calls for.

“I worked with Doug and Bart on An Unfinished Life. It was such a pleasure to watch them interact— truly inspiring. Doug and his crew were always very organized and prepared. Their awareness and knowledge of the demands of production continually impressed me. We couldn’t have done it without them.”

“Of all the movie stars I’ve ever worked with, Bart the Bear is as talented, cooperative, and charismatic as the best of them. He takes no time at all in make-up, never wants to stay in his trailer, and does all his own stunts. I can’t wait to work with him again.”